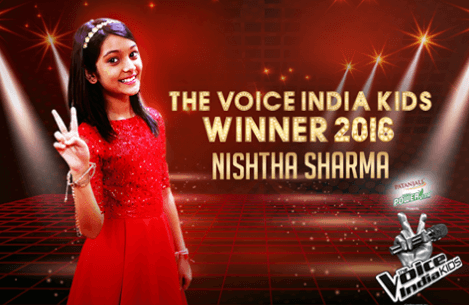 Nishtha Sharma is the winner of The voice India Kids 2016. Nishtha recieved a checque of Rs 25 Lakhs and also a recording contract from Universal Music. The popular kids musical reality show The Voice India Kids has reached the grand finale. The grand finale episode will be aired on And TV (&tv) 23rd October 2016 at 9.00 PM. After tight musical battle top six contestants have reached the finals. Kavya, Nistha, Vishwaprashad, Priyankshi, Pooja and Shreya are the six final contestants competing for the Voice India Kids title. Neeti Mohan, Shekhar Ravijani and Shaan are the permanent judges of The Voice India Kids. Kavya, Nistha and Vishwaprashad are from Team Neeti Mohan, Priyankshi and Pooja from Team Shaan and Shreya is from Team Shekhar.

The Voice India Kids musical reality show journey started from 23rd July 2016 and has completed four months. Within a short period of time The Voice India Kids has become one of the most rated television shows. each episode of The Voice India Kids was trending on the social medias and video sites. Now everyone is eagerly waiting to see the mind blowing singing performances from these finalists. The winners will be decided through public voting. Jay Bhanushali and Sugandha Mishra will be the host of the finale episode. The winners will be updated here right after the official announcement. Get the full winners list/Results and more details about the grand finale here.

Runners up – Pooja and Kavya

Finalists of The Voice India Kids